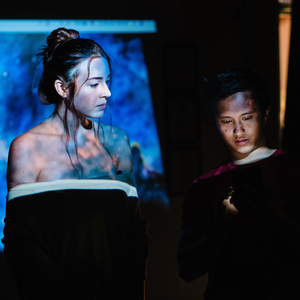 Savanah Joeckel has primarily focused on acting throughout her filmmaking career and decided to try directing during the UNLV 48 Hour Film Festival. In this contest, teams of filmmakers are assigned a genre, character, prop, and line of dialogue to include in their film which must be completed within 48 hours. Our team was assigned the slapstick comedy genre, the prop Fanta, the character Juanita the Ammunition Queen, and the line "I have leaks, doesn't everyone?"

Rather than focusing on generic slapstick conventions, Savanah insisted on building a more meaningful story to avoid becoming a skit. She recalls, "I didn't want it to feel just like a skit or a funny story wtih no substance to it."

You can watch "For Mom" on YouTube, where you can also view the video version of this episode.